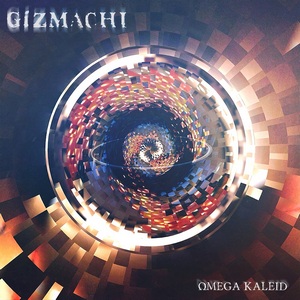 One of those bands that completely fell out of the radar, though expected due to a 16 year waiting period, Gizmachi has finally made a follow-up to 2005’s The Imbuing. The band first caught plenty of buzz ‘back in the day’ by signing to Slipknot percussionist Shawn Crahan’s Big Orange Clown label for their debut and hitting the touring circuit hard before vanishing. Omega Kaleid itself has plenty of backstory to it too, stemming from a 2012 Kickstarter but encountering a number of issues thereafter (including line-up changes) – in short, it’s impressive the album has finally made it to the light of day.

Given the weighty backstory, the first question bound to pop out is ‘Was it worth it?’ and the answer to that is a resounding yes. Even if you haven’t heard of the band previously, Omega Kaleid makes for an excellent entry point. The strongest suit the band has going for them is the unclassifiable nature of their music. There’s a smorgasbord of sounds and directions, but the band makes it work. Big, massive grooves to equally soaring hooks are sure to initially hook the listener and draw them in, but the intricacy below the surface is what gives it the stronger impact over time. There’s plenty of odd time signatures going on in a particular track, and the gargantuan title track is a proof positive of that. Within the first 3-minutes of the 9-minute cut, you’ll get chunky off-tempo grooves, ramped up tempos and intensity, an ethereal clean vocal melody, and soaring guitar lead. So yes, there’s a lot to digest but it’s put together in such a way that you are pulled to the grooves/hooks initially and get such a kick out of them that you want to go back – which leads you in the direction of the more intricate stuff lingering below the surface. There’s a modern feeling to it all, bolstered by some excellent vocal work from Bjorn Strid (Soilwork, The Night Flight Orchestra) and this adds to an initial playfulness within it that makes it hard to ignore. Just to touch on the more complex side of things, take a listen to “Paradox,” as it swirls around jagged riffs and grooves that leap back and forth in an intense fashion, but has some softer moments that let you catch a breath and enjoy the surroundings.

Omega Kaleid should be just the thing to put Gizmachi back at the tip of everyone’s tongue. With just the right amounts of complexity and hooks, it’s a notable balance that modern metal fans are bound to be impressed by.