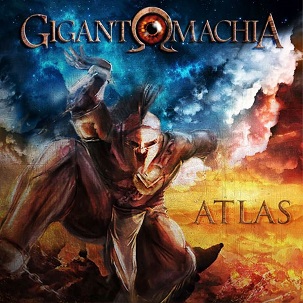 Gigantomachia, a term relating to the Giants’ battle with the Olympian Gods, certainly seems to fall within the guidelines for some rather metal subject material. The epic scope is one that is fitting for translation as well. The band’s first album, Atlas, certainly tackles this subject matter with death metal fury, but unfortunately not with much in the realm of finesse.

The closest ‘tag’ for Gigantomachia would probably be melodic death metal, but think more along the lines of a band like Amon Amarth instead of In Flames. The gargantuan riffs that come at you with each song feel larger than life, certainly conjuring an image of giants in an epic war against the gods of Mount Olympus. “Eye of the Cyclop” will sell you quickly on this idea as it rumbles along with thunderous drums and massive, plodding riffs (with equally furious vocals). But as you continue to make your way through Atlas, it becomes all too familiar with each passing track. There are some keen melodies here and there, but the near-constant emphasis on mid-tempo riffs make it begin to wear on the listener by the midway point. Essentially, if you’ve heard one track, you’ve heard the rest down the line (with some subtle exceptions of course). The focus is on the stomping riffs, but there’s not really anything else that finds much time to shine. Perhaps a small melody once in a while (see “Immortal”) but it seems to lack energy to pull you back in. The riffs work in their monstrous sense, but nothing really ever sticks by the end of the album to make you reach for the play button once again.

Gigantomachia do a good job of displaying some heavy and grand riffs to represent their name, but everything else around it doesn’t seem to match the epic scope. Due to this, there’s just a lack of energy as the album continues to rumble on – with a more varied attack next time around, Gigantomachia might find more strength to build their sound upon.