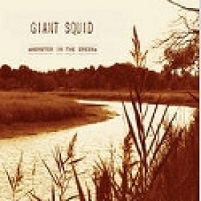 Originally released by the band on their own label in 2005, Monster in the Creek is given the official reissue treatment here by Translation Loss records. This new version provides the original 6-track EP, along with three demos sans vocals and three live versions. I’ve never understood the inclusion of what I see as throwaway tracks… but to each their own. Perhaps it’s for the Giant Squid completists out there.

Giant Squid are without a doubt progressive rock, maybe the post-metal description could be thrown in there and I’ve even seen doom mentioned before but that is far from the case on this release. I don’t really know how I’d go about giving a solid description of their music but this is some straight up, by the book, nerdy prog stuff. Odd time signatures, check. Strange vocals by multiple vocalists, check. Over done and over the top synth, check. Out of place instruments, check. Songs all over the map, check.

Each song goes through enough twists and turns that knowing where one ends and the next begins is really tough and doesn’t matter. For the most part, it’s a lot of mellow clean noodling with soft male and female vocals accompanied by some synth and piano when it will suddenly move into harder, fuzzed-out rock territory, before going into an odd circus music like tangent, and then back to where it started. It’s all a conceptual piece about the New Jersey shore shark attacks of 1916 from what I’ve read. Even thought Giant Squid released a highly praised and critically acclaimed album called The Ichthyologist a few years ago, their talent and progressive prowess is a bit lost here. 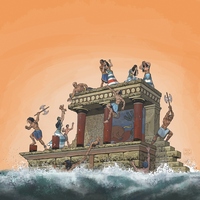 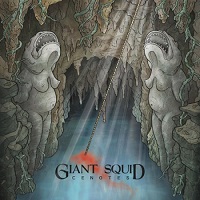