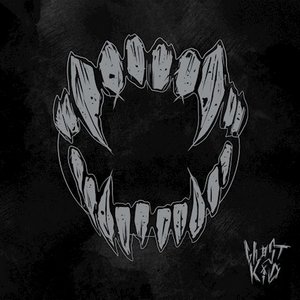 A new band from ex-Eskimo Cowboy member Sebastian “Sushi” Biesler, Ghostkid represents a trip into accessible darkness. Meaning that while there’s a metallic element within (mostly of the modern metal, core, and industrial), there’s also a good portion that is tapping into more mainstream elements such as pop, trap, and even nu metal. But if it’s a combination of these things that you are looking for, Ghostkid has some potential to tap into.

As noted, this sits pretty far on the side of more melodic and mainstream metal. There’s an enjoyable crunch, and the combination of buzzing guitars and pounding industrial rhythms (and occasional trap elements) bring it some due heaviness when the band wants to indulge in it. Driving and energetic tracks like “Zero” and “Start a Fight” effectively merge that aggression into something that’s highly catchy and addictive. Biesler’s vocals zip from snarled rasps to clean singing to bits of rapping to nearly everything in between. The tracks use some major hooks, particularly on the choruses to really pull you into it, with “Drty” and “Crown” being the album’s strongest points in that regard and occasionally provides some Pain comparisions. The way the electronics interplay with the heavy grooves, upbeat riffing, and varied vocal attack give them a fresh, modern feel. That said, there are two slight missteps along the way that hold things back slightly. The first being “Cold World,” a quiet ballad that is more atmospheric but the laid back vocals and vibes make it feel more melodramatic and tedious as the song progresses – succinctly, it feels like a cheap grab at some radio play. “Sharks” also feels like a dud, taking the majority of its runtime to build up to a less than satisfying conclusion.

Two ‘meh’ tracks aside, Ghostkid is onto something intriguing with their blend of both metallic and nonmetal elements. While it may not pull in more of the ‘dyed in the wool’ metal types, there’s certainly a group that will appreciate their blend of modern elements into a catchy and heavy formula.