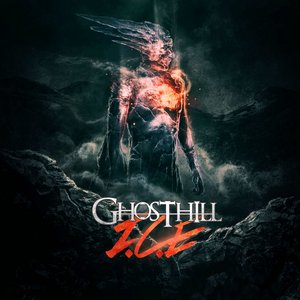 While some may start to doubt the relevance of good cover art as we move towards an increasing reliance on digital music, it still provides the same means to drawing the eye in a crowded space such as Bandcamp. In fact, it’s precisely due to the dark yet flashy cover that this scribe stumbled upon I.C.E, the third album from the Russian power metal crew Ghosthill.

The cover doesn’t exactly scream power metal, but it effectively shows that Ghosthill aren’t your usual power metal band either. Ghosthill fall more towards the more modern end of the spectrum, with a focus on electronic elements to accompany their symphonic approach. The standout track in this regard goes to “Vega,” where the bouncy electronic components bring an almost danceable vibe to the chorus. However, “Corruption” and the more melodic “Hold Me Stronger” also showcases an excellent fusion of more modern elements with a power metal-esque framework. But there’s also some heavier grooves, with galloping charges present in “Fringe” and “Envy” giving the band an edgier feel – adding to the modern sound but bringing them more into their own musical soundscape. The symphonic elements reach more epic heights on “Age of Shadows,” where the catchy riffs (and a great solo) are wrapped into a soaring vibe, further signifying that Ghosthill can blend a number of different feelings together over the course of the album, while keeping it cohesive.

Strong female vocals, an upbeat and modern atmosphere with occasional progressive leanings, and enough heavy riffs to keep it all grounded, I.C.E is a fun and varied album from start to finish. With that in mind, with proper word of mouth Ghosthill should be able to find plenty of fans who will find their direction refreshing as well as engaging.