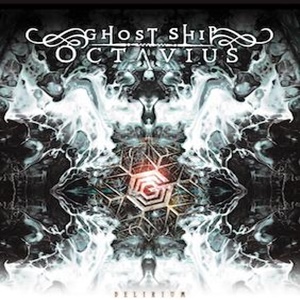 Starting over in certain genres of heavy metal is never easy. Following the demise of Nevermore, drummer Van Williams sought out the help of ex-God Forbid guitarist Matt Wicklund and vocalist/guitarist Adon Fanion to start the progressive metal outfit Ghost Ship Octavius. They released a self-titled debut in 2015 and hit the road when they could – including some recent North American tour dates with Týr and Orphaned Land during 2018 – setting up the sophomore full-length Delirium. Where GSO differs from Nevermore or any of their previous outfits is the multi-faceted influence tree that the band incorporate over the course of this material – unafraid to be heavier, darker, lighter, atmospheric, or propulsive to allow for many intriguing, mind-expansive moments.

Guitars and keyboards can mesh into this hypnotic, gothic tranquility that shifts into softer, tranquil verses before bringing the bombast of instrumentation and vocal harmonies back to the fold – as “Ocean of Memories” achieves for an early first half headturner, only to be followed up by the extreme crunch, pulsating keyboards, and massive Van Williams kick/fill mechanics during “Saturnine” that also feature some distant heavier screams amidst the captivating clean melodies. It’s as if these gentlemen willingly dig into Queensrÿche as much as Type O Negative, but also some European finesse and intricacies a la Communic or Anubis Gate – listen to the twin guitar/acoustic layers for “Ghost in the Well” for evidence of the diverse musical stew bristling with hypnotic catchy hooks seamlessly put together for an aural sway. Those who enjoy progressive edginess topped off by an overriding sense of outer galaxy textures will flock to “Edge of Time” – Adon using a sparse, lower melody for the verses before taking things up to his confident mid-range to upper register during the uplifting chorus, feeling ‘the inertia guide you… liberating your mind’. Neo-classical guitar work filters into the opening strains of “Far Below”, but Matt and Adon succeed as guitarists because they know how to fill the space with those dynamic layers – quieter to louder, twin activities or providing point to counterpoint chords and clean facets that can be gothic or progressive, powerful and extreme at the change of a measure.

You often worry when there are eleven tracks and an hour of material to consume that the listener will lose interest two-thirds of the way through – Ghost Ship Octavius however live for that diversity and ability to never stay stuck in one gear. Delirium as such expands upon their self-titled foundation – the road work seasoning their multi-dimensional approach and sure to continue to gain appeal from not just fans of Nevermore, but most underground metal maniacs.