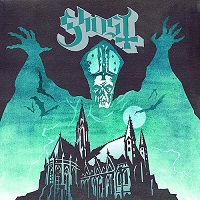 What Witchcraft was to 2006, is what Ghost will be to 2010/2011. Basically, this entails being the “it” band among those in-the-know (read: Fenriz of Darkthrone, various snobby metal journo types, etc.), ensuring a deluge of massive praise that should prop up this fresh-faced Swedish ensemble for the foreseeable future. Amazing how a band that comes nowhere near reinventing the wheel has everyone going ape-shit over it, but anyway…

Best described as classic Mercyful Fate without the vocal acrobatics of King Diamond, Ghost is quite capable of weaving the same mystical spell MF did back in the day. In fact, the foundation of Opus Eponymous is totally derived offMelissa, with similar production values and chord progressions shining through on “Elizabeth” (not their “Melissa,” but it definitely borrows a lot from “Egypt”). To top things off, the Satanic angle MF used to its advantage in those days is totally at the fore here, with the word “Satan” being used habitually. Perhaps the only thing missing would be an exploding skull, but King has that area covered.

Since the band refuses to disclose their names, the singer

has a nasally, but non-annoying tone that is able to carry a chorus (ref. “Stand By Him” and “Satan Prayer”). He almost sounds too relaxed, but the band’s 70’s-inspired metal works in perfect harmony with him, which is probably why “Ritual” is one of the best classic metal songs in recent memory, especially the tail-end, which is a melodic du jour.

Various underground types tend to romanticize a certain sound and era, and without question the proto black metal days of Mercyful Fate will always be clung to. All Ghost does on Opus Eponymous does is re-enact those days, yet they do it such a non-pretentious way that it’s hard to not get onboard. This is must-have stuff, essential for those who have long worshipped at the altar of classic Mercyful Fate. Hopefully their shelf-life will be longer than Witchcraft’s…