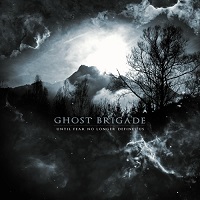 Ghost Brigade is a band that needs to be heard. To those who haven’t caught wind of the Finnish melancholic metal masters, do so without hesitation. Their previous album, Isolation Songs was a monster release, rocketing them to the very pinnacle of their style. Their live show is also one to be reckoned with, with their performance at Wacken Open Air in 2010 being easily one of the finest at the festival

. These guys have certainly amassed a sterling reputation up to now. Following up a release as revered as their last is a challenge – a task of which many bands have crumbled attempting. Said attempt comes to us in the form of Until Fear No Longer Defines Us. Safe to say, Ghost Brigade has delivered the goods with precision and grace.

Now, great albums don’t always register with the brain in the same way. Some astound within the first listen, and some take time in which to grow. Then you have those that are a little of both. Until Fear No Longer Defines Us is one of those special releases that show

what it’s made of immediately, yet gets better with each rotation of the disc. It certainly isn’t every day when an album continues to display new textures after every one of many, many listens. That’s the sign of something special, folks.

Album opener “In the Woods” is a somber acoustic piece loaded with melody that sullenly draws the listener in. Of course, the following track “Clawfinger” breaks up the peacefulness, with a doomy assault of heavy riffs and the deep bellows of vocalist Manne Ikonen. The song

contains many layers – a common trait – making the music interesting and unique. “Chamber” is another standout, with lush clean guitars creating an unmatchable atmosphere, along with some outright killer leads and clean vocal passages. “Traces of Liberty” is a crushing track from start to finish, with catchy yet brutal rhythms being the highlights. “Grain” is one of the most melodic songs on offering, with leads that give the listener chills, along with some well-timed twists. Other standouts include “Cult of Decay” and “Soulcarvers,” but lets be honest – every song on this album is a standout and is it’s own beautiful entity.

How does this measure up to their previous masterpiece? Well, in all truth, they’re both just about equal in this writer’s eyes. Isolation Songs is a special album, and Until Fear No Longer Defines Us is as well. They have their differences, and Ghost Brigade’s latest definitely feels to be a natural progression with some new ideas, all while retaining their unique combination of lush melody and crushing brutality. In a nutshell, they’ve managed to further establish their all so definitive sound, standing taller still above the pack.

Ghost Brigade has accomplished something astounding – again. This album should raise the band’s profile and further establish their name as one of the most superb in metal. Fear No Longer Defines Us is a splendid, well-crafted piece of music that pulls at your emotions and leaves you breathless. This year could yet again be the year of Finnish metal. First Omnium Gatherum’s masterwork, now this, and Insomnium have a new release

on the horizon as well. Many year-end lists may be flying the Finnish flag with pride. No surprise whatsoever.