Ghost Brigade – IV: One With the Storm (Season of Mist) 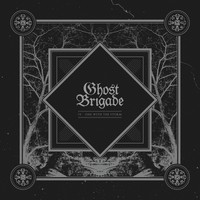 For some reason, Finland’s Ghost Brigade has been perpetually overlooked by many, despite their ever-consistent (and evolving) formula. For those in the know, the three year wait between 2011’s exceptional Until Fear No Longer Defines Us and the present time has been a killer. Supposedly there were some internal struggles within the band (amongst other things) and One With the Storm was almost never completed. But it’s finally here, and certainly worth the three-year wait.

In some ways, One With the Storm doesn’t deviate much from what worked on Until Fear No Longer Defines Us so much as polish the edges. There is more of an extension towards more “alternative” and “post-metal” influences, to counter the usual Katatonia/Opeth/Insomnium/Rapture slant and more of an emphasis on mood (be it doom or gloom). Opener “Wretched Blues” hits things off in classic Ghost Brigade style, full of sorrow-filled melodies and bordering on sludgy riffs. “Departures” moves into some new territory, showcasing the work that Manne Ikonen has put into his clean vocals, with one of the album’s finest choruses. “Disembodied Voices” and “Electra Complex” also move towards more clean vocal friendly territory, with Ikonen’s vocals occasionally having a Layne Staley feel to them. The 10-minute “Electra Complex” is also the centerpiece of the band’s new keyboard stylings (by Joni Vanhanen). A real slow burner, the haunting keys and slowly elevating guitars are mesmerizing until the band explodes at about 6-minutes in with some real thick and angry riffing. The most visceral cut of the bunch, “The Knife” also excels with the band really having a firm grasp of how to balance melancholy with aggression (the ending is fantastic). The album takes a turn for the more melodic (and dare it be said, beautiful) with the ballad “Long Way to the Graves,” and post-metal tinged closer “Elama On Tulta,” which features sparse vocals and some almost uplifting guitar melodies.

One With the Storm is a lengthy affair, weighing in at over 65 minutes. It’s a testament to the band’s songwriting that there isn’t a moment of boredom in that time period. A thoroughly captivating affair, Ghost Brigade have rightfully defended their rank as one of the masters of gloom (up there with the already mentioned Katatonia and Insomnium), and One With the Storm is one of the finest albums you’ll hear in 2014.