Geryon – The Wound and the Bow (Profound Lore) 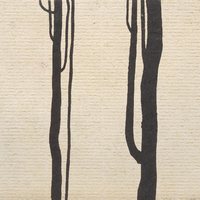 Drum and bass. Entirely not the usual method of assault that one tends to find in heavy metal music, but when your band is made up of half of NY’s estranged black metal outlet Krallice, you can assume that the rulebook has been tossed out the window. The band features Nicholas McMaster on bass/vocal duties and the drums are handled by Lev Weinstein – and that is everything. Don’t mistake this for a minimal offering though, this is one that will resonate with the progressive death metal fans for sure.

After 2013’s self-titled debut, the band was wisely snatched up by the esteemed Profound Lore Records. The Wound and the Bow is the dissonant and lurking album that you would expect it to be, with McMaster’s bass operating front and center for most of the action. Benefiting from Colin Marston’s gritty yet nuanced production, there’s a balance between the rumbling dissonant vibes as well as some subtle melody within. There’s an eeriness to it all as well, like something creeping out of the shadows, as the vibrant bass lines intermix with the sometimes raging drum beats. It’s a combination that feels fresh as you move through the album, and you’ll be enamored with the vibe – whether it’s the more death metal-esque “Dawn” or trippy “Dioscuri,” there’s a feeling that just locks you in. You can’t be sure of what’s next, but you don’t want to miss it when it happens.

If you are interested in taking a trip down the path less travelled, let Geryon be your guide. Metal in all of its full glory sans a guitar, booming with dissonant vibes and dreamy, progressive element that feels more alive than a number of bands with at least twice the number of members, The Wound and the Bow is easy to get behind.