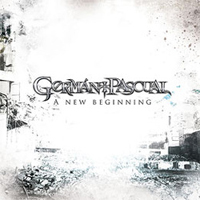 Narnia had the Christian power metal field covered. Musically, they were marginally average at best (yeah, those are redundant terms, but who cares), but it was apparently the strong message of faith and biblical themes that kept many coming back to the drink the proverbial holy water. Their 2009 farewell Course of a Generation was widely considered to be their finest (Blistering bowed out well after The Great Fall), thanks in large part to the addition of former Mind’s I singer German Pascual. Wisely realizing there’s still a market for this type of power metal, Pascual has re-branded himself as a solo artist, with A New Beginning marking the start of his post-Narnia career.

Coming across as heavier than Narnia, yet with a dash of radio-friendliness, A New Beginning sees Pascual not hogging the spotlight as much as one would think. Considering most breakaway lead singers tend to favor themselves (see: Dio, Ozzy), Pascual’s decision to embed himself into the confines of aggressive power metal pays dividends, most notably on “Open Your Eyes” and album highlight “The Wrath of God,” in spite of its quasi-overbearing message. (It should be added Satanic metal bands are just as preachy, if not more comical.)

Outside of some misplaced growls (why power metal bands feel the need insert such thing is maddening), Pascual’s vocals are graceful and at times, emphatic. When he needs to stick his neck out basic 4/4 romps like “Seek the Truth,” he’s there, able and willing to deliver with a chorus. Even a rendition of the Latin National Anthem (“Cancion con todos”) is performed with the type of professionalism that only a veteran of power could do. Pascual is German, by the way.

The possibility exists that Pascual will enjoy the type of career that Jorn Lande does. Meaning, he’ll front his own band, while chipping in with other notable bands when he has to. And if the time comes, a bigger band will come calling to snatch up his services. For now, A New Beginning does the Narnia legacy proud…just don’t run away when you feel like you’re being preached to.