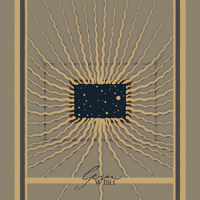 A renaissance man of sorts, Tim Yatras has divided his time between the likes of black metal brigade Austere, Woods of Desolation (more black metal) the recently-dissolved Grey Waters, and Germ. Each have an identity all their own, with the main thread being Yatras’s penchant for melody and unconventional ideas. Grey Waters is probably the best band of the three (they sound like Discouraged Ones-era Katatonia…drool), yet Germ can hold its own, as Wish is a wild combination of black metal and 70’s space. Hawkwind-meets-Emperor, possibly.

Wish goes through multiple genre blends, with the main tributary emerging as black metal, as stray shrieks, popped-off blast beats, and obtuse riffing serve as the album’s base. Yet, the electronic bits take over many of the songs here, starting with opener “An Overdose of Cosmic Galaxy.” For pure imagination’s sake, one could put themselves in a spaceship in the year 3012 and put this song on…that’s what it feels like as keyboards hover in and out, and synths are layered on top of each other. Let’s not forget how danceable the song is. Disco black metal, eh?

Yatras has packed these songs tightly with a variety of ideas, some morphing into flowing melodic territory (“Asteroid of Sorrow”), while the spare parts of the Germ ship stays on point via Yatras’s enjoyable clean vocals on the poppy “Flowers Bloom and Flowers Fall, But I’m Still Waiting for the Spring.” Beyond that, the nine songs that comprise of Wish are unlike anything released this year, a testament to how unlimited metal’s scope is. Indeed nothing can’t be accomplished, and if there is a time capsule handy, sticking Wish in it wouldn’t be such a bad idea. Surely our friends in the future (ala Helloween’s vision in “Future World”) will find that Yatras was on the right track