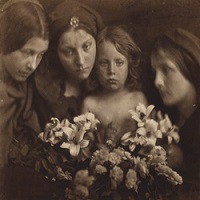 A quick turnaround for this Tim Yatras-led outfit from last year’s pretty hip Wish, with Germ now more engaged in throes of post-black metal than its predecessor. Wish was unique for it was the unsuspecting blend of BM with 70’s synth rock, yet another combination that at first blush seems far-fetched, but worked out in the end. Grief peels back on some of that, while staying in touch with Yatras’s firm grip on melancholy and melody.

The addition of female guest vocals courtesy of Audrey Sylvain (Amesouers, Peste Noir) is a worthy fit, perhaps the she-beast nemesis to Yatras’s clean vocals and scratchy extreme vox. Sylvain is first heard on opener “Butterfly,” which coincidentally, is the album’s lead dog, a song rife with harmonious riff passages and Sylvain’s utterly nasty-sounding vocals. She’s a chick in distress. Elsewhere in the dark/melancholic department, “I Can See It in the Stars” emerges as a winner, with more well-crafted chord combos; throw the post-rock glimmer “Memorial Address” and “It’s Over” in the mix as well.

An album that should float with the metal crowd much better than its predecessor, Grief has allowed Yatras and Germ to slowly slide into the avant-garde black metal discussion. It’s a nice fit; Yatras is one of the more productive individuals in our scene who appears to be laying the groundwork for some pretty intriguing stuff down the road. Grief is just the start.