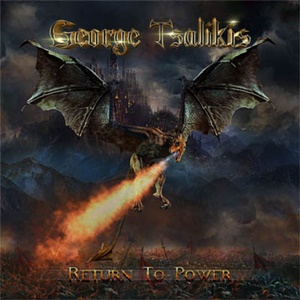 Known to this scribe through his previous work in bands like Gothic Knights and Zandelle, vocalist George Tsalikis released his first solo album in 2016 with The Sacrifice. Five years later we have a new record, Return to Power a throwback to the man’s passion and natural comfort in the power metal realm. Tackling a majority of the instrumentation (drums handled by Joe Cardillo), George has a strong vision of where he wants these ten tracks to go, containing vibrant guitars, supplementary piano/keyboard parts, pumping bass lines and his natural soaring melodies that brings memories of 80’s/early 90’s US metal along with a mix of British/European influences.

Subject matter runs the spectrum of fantasy, dragons, triumphant storylines and of course the occasional ‘uplifting’ metal brethren effort as you’ll get with “Together We Rise”. George has an interesting way of mirroring specific riffs and runs in an ascending manner, as well as belting out those higher Tate/Halford-esque falsetto screams with conviction. Joe possesses fast double kick activities while holding down steady metal tempos, up to the task be it in a natural driving Riot-era Thundersteel momentum for “Live to Ride” or taking on a more epic, slower moving arrangement a la Dio for the magnificent “In Memory”. The guitar breaks are quite emotive and engaging, another sign of careful creative expression instead of throwing out fretboard Olympics that aren’t conducive to the song – and when adding in the piano movements add in a haunting, neoclassical angle to the proceedings. George has a love for Iron Maiden as well in terms of setting up atmosphere with calmer intros that burst into thunderous terrain – “Master of the Sky” another energetic highlight featuring galloping bass, dragon-filled imagery and proper twin guitar accents in the key moments for additional dramatic effect. Add in the obvious fire-breathing cover art from Augusto Peixoto and most will know what to expect before pressing play.

Certain artists know what their fans want from them once proving themselves previously. Return to Power is that record for those that love US-oriented power metal from the 80’s and 90’s – nothing more, nothing less.