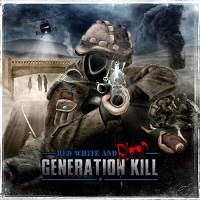 The side-project of Exodus singer Rob Dukes, Generation Kill earmarks classic thrash/crossover, doing its best to not sound like Exodus, apparently. And they don’t, leaving that up to the retro thrash minions who still don’t have a clue. In the case of the band’s Red White and Blood debut, there’s an ample of amount of pissed-off thrash of the American variety going down, along with a noticeable Pantera influence that almost cancels everything out. At least this isn’t Superjoint Ritual.

Dukes’ animated vocals are the focal point here and good for him – he often has to wait at least two minutes in every Exodus song for his vocals to kick in (get out your stopwatch). As a thrash singer, Dukes is one of the best going now, even when he’s singing rather juvenile lines on the title track, with the soon-to-be notorious line about “Eskimo pussy being mighty cold.” Yeah, that one won’t leave the brain for a while.

Musically, Generation Kill doesn’t do anything that hasn’t been done a million times, although the steamrolling “Feast For the Wolves” is easy to nod one’s head to. Not very keen on the Pantera-like “Self-Medicating,” which sounds like a Great Southern Trendkill b-side, as does “Slow Burn.” Rounding out the set is the Sabbath-meets-Overkill plunge of “Walking Dead” and punk-oriented “Let Me Die.”

A fantastic addition to Exodus, Dukes is able to prove with Generation Kill andRed White and Blood that he is more than Gary Holt’s diamond in the rough. While there’s nothing here that won’t make anyone take this over Exodus, it’s cool to hear Dukes in this setting. Worth checking out.