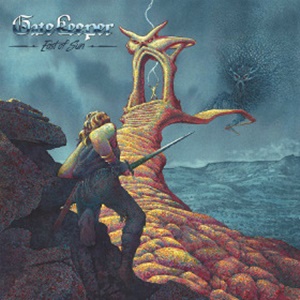 Seeking to sustain street cred for their ability to spot talent on the heavy/power/doom front globally, Cruz Del Sur Music have quietly grown quite an impressive roster for fifteen years with Pharaoh, Argus, and Atlantean Kodex three of many who make the rounds frequently as critical/consumer favorites. Western Canada’s Gatekeeper aim to put their name on that must buy list, together since 2009 and evolving out of a solo project by rhythm guitarist Jeff Black into a full outfit. Releasing EP’s, split singles/albums, and a live record – they finally put forth a studio full-length for East of Sun, and this has that 80’s sheen with a mighty Manowar meets Metal Massacre series affect over the eight originals presented here.

It’s hard not to notice the larger than life multi-tracked choruses, beaming with steel to make “Warrior Without Fear” and the doom-laden dramatic “Swan Road Saga” exhort the proper chanting, screaming, and shout-a-long propensities beyond the catchy as hell riffing and melodic lead breaks. Most newbies will be levelled by the old Metallica meets Accept power charge and upper register screams that open “Blade of Cimmeria”, the shortest and most immediate track on the record – a proper start to get that blood pumping and muscles bulging while Kenny Kroecher and Jeff Black wield the mighty double harmonies and proper accents. Acoustic guitars also drop in from time to time – even mid-song during “North Wolves” where some lower baritone ‘woahs’ could be another intimate connection moment for the listener. Vocalist Jean-Pierre Abbound has that raspy nature that can make or break a band like this – as there are aspects where he calls out to the heavens (the title cut most evident), but other times where he sits in that Nazareth/smoky register that certainly makes him distinctive.

Featuring lyrical themes on the fantasy, mythology, Lovecraft, and Vikings tip that mirror the epic heavy metal riffs and doom inflections, it’s not surprising that you get two covers to conclude the record with “Death Rider” from Omen and “Hall of the Mountain King” from Savatage. The latter delivers the goods better to these ears than the former, only because the orchestration/keyboards add that drama element to the original that are not present on Gatekeeper’s take. Those who want more of the new guard twisting 80’s influences into their own take will probably find East of Sun more than satisfying.