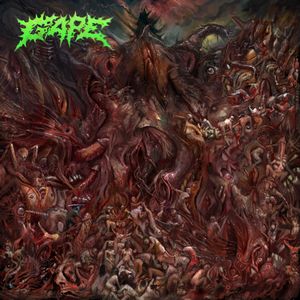 Sometimes you just have to chuckle and grin a little bit about the absurdity of brutal death metal lyrics. Either the excessive amount of gore, sex, or both. In the case of Tasmanian act Gape, it’s the combination of both (as it is for many). Yet despite the tongue and cheek nature of the presentation, there’s something underlying that actually works. And that’s brutality of course.

Brutal death metal of this nature has a tendency to fall into the category of being too worried about slams and less about songs, but Exploit the Moist holds together well. The usual genre boxes are checked: ultra-low growls and higher screams, groovy riffs, severe slams, and an abundance of samples at the beginning of tracks. The samples range at the goofier end of the spectrum (as do the lyrics), including Paul Rudd from Wanderlust, but they fit the material and don’t overdo it. The band doesn’t accelerate into high gear as often as some of their peers, which actually works to their advantage. The more groove-based approach offers a more restrained yet catchy approach. Some solid grooves, and even some movement into near death ‘n roll territory (“Smelly Vag Kebab”) keep the album from feeling like a one trick pony.

It may not entice anyone outside of the usual brutal death mentality, but for it serves the purposes for what it is. Tongue and cheek humor, an emphasis on groove, and a focus on songwriting should give brutal death devotees plenty to revel in.