Gamma Ray – To the Metal (earMusic) 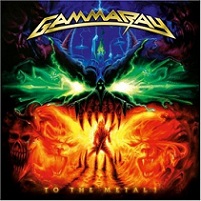 Business as usual for Kai Hansen and co. with To the Metal. Following up the totally excellent Land of the Free Pt 2, To the Metal sees Gamma Ray tone down some of its traditional Euro speed metal antics in lieu of a batch of unremarkable rock-solid anthems. Granted, none of these come close to touching the band’s glory era (Somewhere Out in Space through No World Order), but Hansen has done enough for power metal, so he gets a reprieve.

Opener “Empathy” is a bit too plodding to be a lead-off track, containing a disengaging chorus and tempo. “All You Need To Know” sees a guest appearance from former Helloween vocalist Michael Kiske (who hates metal, but not Hansen, apparently) and it’s fitting of the bombast and pomp that usually surrounds anything Kiske is involved in. “Time to Live” is a direct rip-off of Helloween’s “I Want Out,” another in a long line of straight-plagiarism songs

from Gamma Ray that started with “Solid” (off No World Order) taking direct cues from Judas Priest’s “Rapid Fire.”

“To the Metal” is a sure-fire festival

anthem; fun, a bit cheesy, but too good of a time to pass up. “Rise” picks up the speedy portion of the album, while “Shine Forever,” “Deadlands” emerge as strong, very typical GR numbers (read: ample double-bass, fluid guitar runs and Hansen’s careening vocals). Closing ballad “No Need to Cry” sorta just meanders off and is ill-placed at the end.

Unlike Helloween, Gamma Ray are now treading water with To the Metal. As much as a step forward Land of the Free Pt 2 was, this could be the most tepid and uninspired release of the band’s career since their sluggish Rolf Scheepers days of the early 90’s. Not exactly the way to begin a new decade, but if there’s one man who can turn dirt into power metal gold, it’s Kai Hansen.