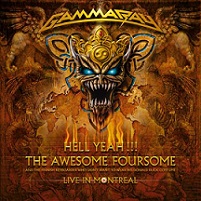 Kai Hansen and the gang keep rolling, just like their now partners in crime, Helloween. The two are forever linked, but let’s just focus on Gamma Ray at the time being and their marvelous 2-CD/DVD live set, Hell Yeah! The Awesome Foursome.

Recorded during the band’s 2006 North American tour in support of Majestic, the quartet roll out a virtual hit-for-hit song

selection, with some choice selections dusted off for good measure. Helping matters immensely is the band’s considerable musical ability, especially Hansen’s vocal delivery which surprisingly shows little wear and tear for a guy who has been singing power metal since the mid-80’s. Hansen’s capable, totally personalized vocals are in top form during “Rebellion In Dreamland,” “Valley of the Kings” and “Blood Religion,” which sees the man hit some earth-shaking highs.

The song selection is killer, with Gamma hallmarks (and some of this scribe’s personal favorites) like “Heart of the Unicorn,” “Man On a Mission,” “Land of the Free” and all-time best Gamma Ray tune, “Send Me A Sign.” If there ever was a nominee for pop power metal perfection, that would be it right there.

Tacked on for good measure are cuts off Land of the Free II as bonus numbers. Those include “Into the Storm,” the very-Euro “Empress,” “From the Ashes” and “Real World.”

Rarely do we toss about the phrase “Power Metal Institution,” but that’s the jist of the matter – Gamma Ray have been a top-notch, uber-dependable power metal ensemble since Hansen took over the vocal spot in 1995. Glory all the way around, folks.