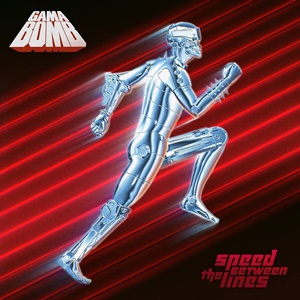 Irish crossover thrash act Gama Bomb show no signs of stopping the rampage on their latest album Speed Between the Lines. Which is ideal in an era where experimentation and multiple sub-genre bending takes place to differentiate yourselves from the pack. These comic book loving, 80’s nostalgia gentlemen stand firm that they love their music packed to the hilt with raging riffs, ample gang background vocal support, and engaging tempos to keep the masses bouncing and head bobbing.

Confident that his vocal surgery has fully healed any woes/strain from the past, Philly Byrne lets his Rob Halford piercing high possibility shine numerous times, from the opening passage on “R.I.P. U.” to an early video favorite “Bring Out the Monster” – adding to an already roaring, personality-driven range that bares similarities to Bobby Blitz/Overkill. Consistent uppity/double bass driven kit work from Paul Caffery as well as spirited riffing/lead break ecstasy from Domo Dixon and John Roche elevates “Motorgeist” and the Flotsam & Jetsam-oriented banger “We R Going 2 Eat U” to favorite status after multiple spins. Their sense of humor and knowledge of movie history comes into play for “Kurt Russell” – because who else pays homage to an actor known for classics like The Thing and Big Trouble in Little China – but the band also knows when to deliver pointed social commentary about environmental disaster for “World Gone to Hell” and social media conformity on “Stay Rotten”. Musically Gama Bomb explode, thrust, and parry in that crossover mold that makes many think of Agent Steel, Anthrax, and Overkill coming together against Nuclear Assault/ Razor – a boatload of 80’s influences for sure, but sharp and precise with the benefit of a crunchy, in your face production.

Comparing Speed Between the Lines to previous albums, there seems to be more of a return to Citizen Brain and Terror Tapes tenacity while benefiting immeasurably from several hundred more gigs, unlimited liters of alcohol, and genuine appreciation for the genre at hand. Bottom line – thrash mongers need Gama Bomb to stoke the flames and get the party started. 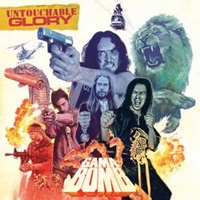