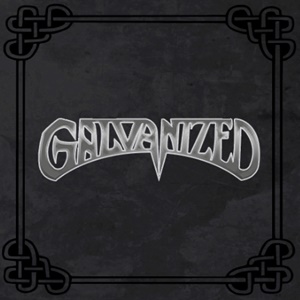 Recently discovering this quartet opening for Havok in Providence, Galvanized are a local outfit from Rhode Island. Based on a brief conversation with bassist/back up vocalist Armando Yambao, the core of the group has been together for quite a few years, but with the development of second guitarist Rob Peck finally shifting into a different gear for recording and live show purposes. As this self-titled five song EP showcases a sound that embraces a thrash meets metalcore stance, alluring through diversity while also alerting the listener to possible signs of strength and weakness at this early stage of development.

After a few passes, it’s evident that Galvanized grew up in the 90’s and 2000’s period of heavy music development where American acts like Pantera, Trivium, Lamb of God, and Shadows Fall ruled the landscape across the live circuit – but also give a bit of a nod to thrash forefathers like Metallica and Megadeth. You don’t often get the chance to hear bands stretch into longer instrumental sequences where the bass solo comes before the lead guitar break – but that’s exactly what you’ll get in the neck whipping, groove-oriented effort “Spawning a Legend”. Kyle Doyle and Rob Peck unleash a flurry of licks and riff tricks, joining the tribal march with drummer Josh Card during personal favorite “The Uprising”. The normal rough and tumble growls and screams Kyle employs work quite well to add more aggression to the music. But if there’s one significant area that needs more coaching/training, it’s when he decides to go for the clean melodies during songs like “Reform and Reprogram” and “Thoughts of Resonance” – as he sounds a tad out of tune and more like an emo singer stretching through voice changing adolescence than a potent, convincing force of nature.

Do not fear the metalcore tag, as Galvanized put solid effort into creating individual songs with proper hooks and transitions, and do not rely on ‘breakdown’ mechanics. An act definitely to watch as they write, record, and perform more, they have great tools and ability that can translate into another young New England metal force.