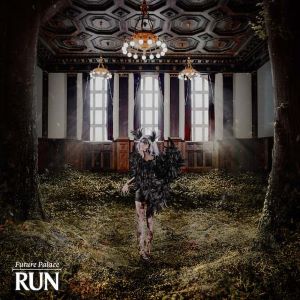 In the last few years, modern metal has reveled in trying new things and combining different sources in order to have a fresh sound that feels metallic, yet isn’t afraid of crossing over and dabbling in more mainstream territories.  German act Future Palace return with their second album, Run, with this this mindset at the forefront of their sound.  Sure, some comparisons can be made to other acts at the moment within that post-hardcore and metalcore sound, but Future Palace comes through with some polish and an ear for mixing what works to make Run a compelling listen you’ll want to dig into repeatedly.

What works best is how the songs keep a certain modern metal consistency, yet they contain different angles and feelings to them to create a record that stands out from beginning to end.  Opener “Paradise” offers listeners a snippet of how catchy the band can be, utilizing an upbeat chorus (complete with buzzing guitar melodies in the background) as well as laying out the heavy/catchy dynamic.  “Flames” employs an immediately earworming and exotic melody to open before then turning the tables and then veering into more hip hop elements and electronic beats – but before the diehards come running to cry foul – the band zips back into more hard rock territory with a strong chorus and eventual dive into much heavier ground before the track finishes.  They slow the tempo down around the midpoint of the album with “Sleep Tight,” which prefers to slither around dark corners and dreamy moments rather than dig into a frontal assault, and allowing vocalist Maria Lessing’s singing to really take the forefront.  Likewise, “A World in Tears” mixes up a lot of what the band has put forth in its position towards the end of the album, and polishes it to fever dream status – a thrilling chorus, bouncing electronics, and just enough crunch to keep it moving forward.  Those seeking heavier moments should be pleased with the balance found within the more punk-ish attitude of “Locked” or the visceral energy of “Defeating Gravity.”

Run is energetic, hook-driven, and addictive, while still being an album that is happy to stick around for dozens of listens.  The way everything from metal, rock, and even more electronic and hip hop arrangements are integrated into the band make Future Palace a name that many should find some appeal in.  Worth your attention if you are looking for modern metal that isn’t afraid to switch some gears.