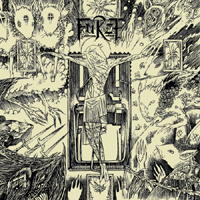 All kinds of weird and strange – not to say that this is the good kind of weird and strange. One man black metal bands are pervasive in number and vary wildly from absolute shit (everything Xasthur has ever released) to absolutely fantastic (Mirrorthrone’s Gangrene comes to mind), with various groups falling everywhere in between these two ends. Furze, the working moniker of Norwegian Woe J. Reaper offers on Psyche Minus Space Control something different than past releases, the proceedings containing slim to no black metal at all. Instead this album covers a very exploratory garage rock/doom hybrid, each track droning on in an almost completely instrumental fashion.

And over all this instrumental riffing and doomy drudgery is synth work straight out of an Ed Wood movie. So much of the weirdness factor is exacerbated by how oddly the keyboards are used to pepper sounds over the rest of the music, readily audible in album opener “Occult Soul, With Mind.” The meandering nature of the music, something not uncommon in doom circles but especially irksome here, is brought to a head again on “Triad of Lucifer.” “Psych Mooz Space Control” comes off as two separate pieces thematically but spliced together physically, the opening few minutes serving as an intro of sorts, readily switching gears around the five-minute mark into doomy flavoring so prevalent elsewhere. Unnerving synth work opens up “Reaper Subconscious Guide” before the song shifts into a rather broken attempt at garage rock, failing to hook the listener and really being a chore at seven minutes in length.

If Furze’s website is to be believed, the preceding album had received some particularly high praise from several illustrious figures within the black metal scene. Comparing their impressions with the last album and the music heard on Psych Minus Space Control creates a large dissonant gap and really begs to question if they’d feel the same way this time around. Arguably out there for the sake of being out there, without the musical ideas to back up that journey to the fringe, this is a release you’d be best off avoiding.