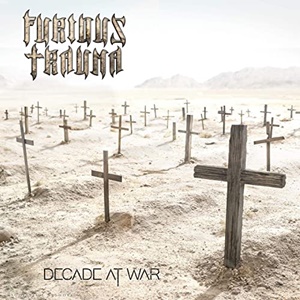 Danish thrash act Furious Trauma return with their first studio album in 21 years for Decade at War. Originally parading their sound during the 1990’s, their last record Roll the Dice came out on Season of Mist in 1999, as the band broke up around 2003. Vocalist Lars Schmidt is the lone original member left from those days, taking up the bass as well while rounding up the current lineup with ex-members of Dominus and Jackal among others. Developing thirteen new tracks plus re-recording a couple of early cuts ensures if nothing else a longer record – clocking in at a robust sixty-five minutes and change.

We have a band that straddles the lines of melodic thrash and gritty, groove-oriented heaviness – melding together a bit of the tried and true staples when it comes to crunch, stop/start mechanics, and slamming tempos, yet having a raspy vocal approach and distinct hooks designated for hair windmills or relentless headbanging. Rene Loua and Daniel Steely lock step into some sinister rhythms and arpeggio-laced shred aspects plus the right bluesy/melodic tradeoff insight a la Artillery and Metallica for early highlight “Plague of the New World”. An obvious difference maker is the much more natural drum tones (specifically in the snare and kick departments) Brian Andersen is a recipient of thanks to the mixing/mastering prowess of Tue Madsen – check out his sick fills and speed during “Ultimate Divine” or the focused “We Are Furious” as the man expends energy by the truckload. Although most of the songs fit into a conventional timeframe, “Comin’ Home” at 9:34 gives the listener an expansive approach, where Lars lays into some different bass ethics, the guitars convey a wider array of atmospheric and epic textures, and the pacing proves Furious Trauma doesn’t have to always be thunderous and aggressive to get their metal point across. Choosing to re-record “Born of the Flag” and “Chaos Within” from their first two albums provides a history lesson in Furious Trauma, a crockpot of Bay Area potency against European charm.

Lars hoarse-style growl to scream approach has more of a crossover aspect that probably will make many think of Gary from Pro-Pain against a bit of Kirk from Crowbar – keeping Decade at War outside the ‘commercial’ side of the genre. Plenty of purveyors who like Artillery, Slayer, and Grip Inc. against the groovy side of say Overkill will find favorable tracks to consume and appreciate here.