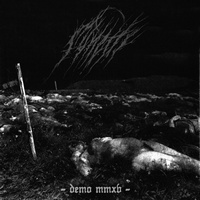 The attention and praised heaped upon French-Canadian black metal is largely warranted. The mini-scene has produced such otherworldly bands like Forteresse, Gris, and Sombres Forêts, who might be the best of the bunch. The elements these bands so greatly utilize (depressing atmospheres, quasi Norwegian chord mangling, and tortured vocals) often come to roost over songs that are stretched out well past the standard minute-to-minute mark. It’s a sort of “listener-reward” angle that works only when patience is in long supply.

Looking to hitch their wagon to the French-Canadian black metal train is the duo of Funeste, who are comprised of Y. Panos (vocals, bass, programming) and Leo F. (guitars, programming). Their four-song Le Triomphe du Charnier debut EP isn’t the mesmeric trip that the above-mentioned bands can so easily create. Rather, it’s a mild take off on Americanized black metal, ala Leviathan and Xasthur. The guitar structures and tone are certainly similar; finding the space between basement BM and audibly acceptable BM. The push-and-pull between dynamics like winding melodies and deserted doom breaks works well, most notably on “Diptera,” the most mystical sounding song of the four.

The misnomer with Funeste will almost certainly be that they’re among, sonically, the likes of Gris and Sombres Forêts, but they’re not. The band’s well-played take on American primitive black metal translates well across the four jams found on Le Triomphe du Charnier, suggesting an old, but familiar adage: Don’t judge a book by its cover. And, don’t judge a band based on where they’re from.