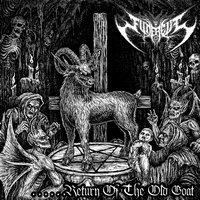 Brazilian black metallers, Funereus, never digressed of raw forte during their five years as a band. Hard to say whether Return of the Old Goat is more or less “Satanic” than their previous works, just goes to show how deeply they indulge in the devil’s designs. The album cover speaks plenty for what lies behind it: in front of an inverted cross an ireful goat stands on a pentagram surrounded by demons and a witch holding a freshly sacrificed child. Pretty sick, eh? Although the nefarious Funereus made a new album, their sound remains akin to the peak of primitive satanic black metal.

Valefar rocks on the vocals and drums; his bestial blast-beats, sonorous snarls, roguish growls and impish laugh are just a few of his superiorities. Sargatanaz slays it on the guitar with lots of DB, distortion and rapid riffs. Together, the duo makes magnificently nasty noise. Just listen to the second and third tracks, “Prelude” and “Funeral Ghoul,” needless to say the former is a prelude to the latter. Twenty-three seconds of horror-movie graded rattling chains and horrific growling continues into the next song with even brasher growls and comes to an end when the clamor of guitars, pounding drums and terrifying screams commence. The two tracks definitely enhance the creepiness of one another.

There’s a strong presence of Satan worship and/or reverence of the anti-Christ and the unholy spirit throughout Return of the Old Goat. “Ascending the Throne of Satan” is more than the title entails and is beyond an account of Satan, a great song conceptually and compositionally. “Umbra Atrox” is superb with a gruesome mood and groovy rhythm. The title song, “Return of the Old Goat,” is an epically tumultuous piece. Really, every track here is a brilliantly bellicose offering.

Nothing to complain about with this album, unless you don’t like thrashy black metal, if that’s the case then you’re in the wrong place. These seven songs might have more musical consistency than variety but that’s precisely why Return of the Old Goat is a terrific record for those of us who appreciate a well-done work of furious funeral hexing darkness.