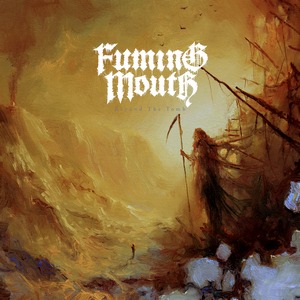 Straddling the line between hardcore and death metal sits New England’s Fuming Mouth. Capitalizing on strong feedback from last year’s debut in The Grand Decent, the band has signed with Nuclear Blast and are releasing this abrasive 3-song EP Beyond the Tomb. Primitive and heavy in all the right ways.

While combining the HM-2 pedal and aggression of death metal with hardcore inspirations isn’t the newest thing to come around at this point, Fuming Mouth capture it at its essence. For starters, the guitar tone is pleasingly disgusting. It doesn’t take too long to get into the real meat of it, with sludging riffs and a barbaric assault starting right off of “Beyond the Tomb.” But in addition to some massively heavy moments, like every time the band slows things way down, there’s also some atmosphere that switches it up with some slightly melodic vocals (of the hardcore variety). Fiery guitarwork has its place too, so don’t just expect a reliance entirely on the Neanderthal approach to bruising and heavy riffs. That said, the band is at their best when they are slinging out sludgy mid-tempo chugs like the opening of “Master of Extremity,” which then lays into some rather low vocals and monolithic chugs as it slows down. Speaking of which, final track “Road to Odessa” lays out a bruising when it slows down into Obituary-esque riffing tempos, but coats it with some atmospheric melodies to keep your intrigue up at the same time.

All but certain to leave some devastation in their wake, Fuming Mouth dole out punishment with each riff in Beyond the Tomb. Nuclear Blast is likely to give these guys a massive springboard to reach out on, and anyone looking for some oppressive death metal with the immediacy of hardcore is bound to get excited with this one.