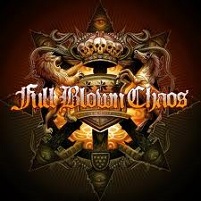 The subject of metalcore is a touchy subject with many. Some embrace it fully, while others treat it is if it’s the next pandemic. In the viewpoint of this writer, there are two directions of which metalcore can travel

. The creative, sometimes melodic, and heavy-hitting stuff such as Heaven Shall Burn and Maroon is the best and most interesting route of which more should go. Then there’s the overtly boring, bland and almost nothing but beatdown-laden drivel that many perpetuate. Unfortunately, Full Blown Chaos is a band that has always fallen in the latter. With their fourth effort due early this year, what direction will the self-titled disc go?

Nothing much has changed with these guys, to much disappointment, but not a load of surprise either. The opener “Doomageddon” almost immediately begins with a listless breakdown and doesn’t really go anywhere from there. This is a theme throughout the entire album – lots of breakdowns that are all very similar that are simply bland. Sure, there are some attempts to bring some melodic qualities to a few tracks, but they all amount to nothing more than bland and unimaginative. The only positive points that can be given is that this is a hell of an aggressive album, with a lot of fervor on display from beginning to end. That and the band do portray a positive message with their music, which is a definite positive. Unfortunately, that enthusiasm and power are completely overshadowed but the blatantly sub par songwriting that screams boorish and uninspired.

If you’re one of those people that dig by-the-numbers acts such as Hatebreed, or if you enjoy any of Full Blown Chaos’ previous works, than this will probably be right up your alley. For everybody else, there isn’t much to flip out over here. Metalcore that offers 99% similar breakdowns that comprise most of every song

is plain uninteresting. That’s the common theme with this album, and this band, for that matter. True that they stick to their guns, but in the end, Full Blown Chaos – both band and album – don’t have a whole lot of quality on offer.