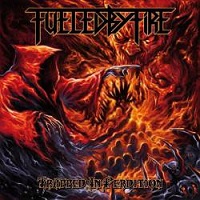 It didn’t take a rocket surgeon to surmise the retro thrash scene’s shelf-life would be a quickie; watching the bands that comprise of it crawl to respectability is another thing onto itself. Whether it’s Bonded By Blood, Merciless Death, Warbringer, or this review’s subject, Fueled by Fire, having to bear witness to these acts and their various lineup reshuffles, last-ditch tours, and label fallout is less vindicating than it is a harsh, cyclical reality of metal. Hoping to extend their career, California’s Fueled by Fire have hooked up with Napalm Records for the release of their third album, Trapped in Perdition.

“Dated” is the appropriate descriptor for how FBF goes about their thrash business. If this were still 2007, then it would still sound as such, but at least it was able to trick people into thinking it was fresh and authentic. Now, thrash of this brand sounds so sterile and worse, comical. So by the time poorly-aged and cliched songs like “Defaced Mortality” and the real capper, “Pharmaceutical Extermination” enter the stratosphere, one is left ponder how in the world anyone could excited for something that is a double-whammy of worn-out thrash. (Note: There must be a song title naming convention handbook – all of these bands favor virtually the same adjective and noun phrashing for their songs.)

Bear in mind there is no pre-determined bias toward a band like Fueled by Fire or even their brethren, but the thrash overload that occurred four-five years ago worn down quite a bit of people, DR included. Trapped in Perdition is reflective of what is now, two eras long since passed: the mid-80’s, and the late 00’s. Hopefully by the time thrash has its third revival, we’ll be in another frame of mind. Not now.