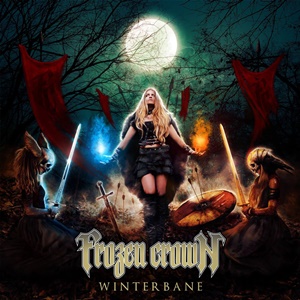 Italian act Frozen Crown appears to be at an interesting juncture career-wise. Gaining attention for two albums over the past three years, they were picked as special guests for a tour run across Europe with Dragonforce last year just before COVID-19 hit. They would lose three members in the group heading into the recording of their third album Winterbane. The core husband and wife duo of guitarist/keyboardist/vocalist Federico Mondelli and singer Giada ‘Jade’ Etro move forward – hunkering down to release their most focused and diverse effort to date, continuing to excel in their power metal comfort zone.

Newest drummer Nico Tomasini along with bassist Francesco Zof and second guitarist Fabiola ‘Sheena’ Bellomo add their own individual touches and energy to the proceedings. It’s hard to believe Nico is still a teenager as he capably throws down monster fills, solid tempo mechanics, and bursts of high gear double kick thunder during “Far Beyond”, while riding in mid-tempo/cultural textures for the gallop/marching-oriented “The Water Dancer” – the latter developing heartwarming twin guitar melodies from Federico and Fabiola that rival Thin Lizzy, Iron Maiden, and Helloween. Emphasis on undeniable musical hooks matching the stellar vocal chops of Giada aid the cause for instant appeal on specific cuts – it’s hard to not be mesmerized by an anthem-oriented arrangement like “Towards the Sun” with its pop-oriented chorus, or the keyboard/guitar syncopation and crunchy support for “Angels in Disguise” that seems to be a staple for many Italian power metal groups (gaining a vocal assist from Federica Lanna of Volturian). The closing nine-minute epic “Blood on the Snow” contains Scandinavian-oriented melodic death components including harsh vocals from Federico, a circular cultural hook throughout and plenty of savage power riffing/dynamics – one of those tracks that should be a permanent fixture in headlining sets for the band. And it’s great to hear the band take on the Painkiller-era Judas Priest track “Night Crawler” – Giada giving her own smooth take vocally while the main riff and lead breaks still cause spasmodic excitement.

Leveling up to be on par with contemporaries like Stratovarius, Gamma Ray, and Sonata Arctica in their prime, Winterbane contains all the commitment to expanding their horizons with outside influences from the pop, folk, and melodic death genres to apply to the Frozen Crown sound while not sacrificing solid execution, performances, and proper focus. Bravo! 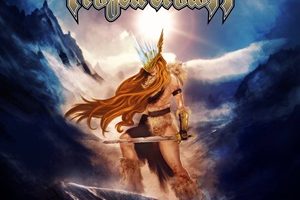 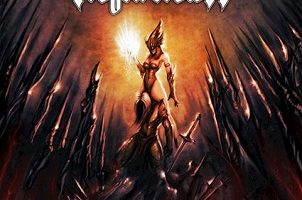