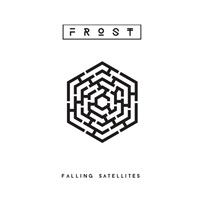 Here is a UK progressive supergroup with ties to everyone from Arena to It Bites and IQ among others that follow an interesting pattern through their three-record discography. Meaning- release a record, followed by dissolution, only to reunite for another album, then go on hiatus due to vocalist/keyboardist Jem Godfrey’s health worries and increasing workload as a result of running Frost*. Five years in the making, the band return for Falling Satellites, another powerful amalgamation of layered vocal harmonies, electronic/keyboard embellishments and a progressive undercurrent that one moment lifts spirits, and the next moment can stun in sheer musical free flow.

Keyboard swirls often signal the next firestorm of progressive interaction for the quartet – ceremonial and bombastic tones that effectively set a bright tone against the shimmering vocal harmonies from guitarist John Mitchell and the aforementioned Godfrey to make “Heartstrings” and “Numbers” immediate head turners, the latter featuring a “Synchronicity” circular-like musical pattern. Conceptually dealing with a life is short, live it now ethos in the lyrics, from “Signs” to the bluesy but equally intoxicating sonic crush for “The Raging Against the Dying of the Light Blues in 7/8” Frost* give the listener an intriguing odyssey through progression, through sub-genre hopping, through alternative outlooks that can favor keyboards and bass one segment, then guitars and drums the next. Joe Satriani contributes a blistering lead break on the otherwise subdued “Closer to the Sun”, ramping up the energy around the three-minute mark to make this 7:20 offering another head twister.

It’s safe to say that these musicians have a healthy love and admiration for old Genesis and Emerson, Lake and Palmer – while the rhythm section of bassist Nathan King (Level 42) and drummer Craig Blundell (Steven Wilson) dance comfortably around odd time signature parameters for “Nice Day For It…” as if they were made for the genre. Plenty of DR readers love bands like Frost* because they create outside of the box, pushing the scope of instrumentation while also keying in on hooks and melodies to broaden their following. Falling Satellites drops from the sky and will fall directly into the right aural recesses of alert music aficionados.