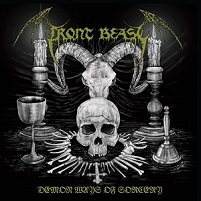 With a massive assembly of splits, EPs, and demos to their name, Germany’s Front Beast (who is really one dude: Avenger), have the productivity and slinky sub-blackened thrash template to match. If you’re thinking the band uses a studio like a turnstile, you’re probably not too far off. Demon Ways of Sorcery sounds unrehearsed, is legitimately sloppy, like Avenger was tracking one instrument, then running over to track the next, then rushing to FedEx to have the “masters” (a term we’ll use loosely) sent off the label in less than 24 hours. That kind of sloppiness.

As only the second full-length the band has produced in a 14-year career, Demon Ways ofSorcery inherits the native early thrash banging that made Kreator and Sodom so vital when they first started. Of course, this pair had good songs and imagination to work with; Front Beast…not so much. “Primitive” might be the appropriate adjective for the sonic turbulence thrust upon numbers like “Bearer of Satan’s Flame” or “Filling Skulls With Angel’s Blood,” the latter which sounding like it was tossed together after a six-pack was downed. The riffs tend to grate and tail off sometimes, while Avenger’s questionable time-keeping and solo work don’t quite qualify as proficient. Still, the mid-paced “Broken Seal of White Light” has merit, maybe “Hidden Black Masters,” too.

The noticeable lack of musicianship on Demon Ways of Sorcery might appeal to those who found the halcyon days of Sepultura, Venom, and Hellhammer worthy, but sheesh, that trio ruled the day over 25 years ago. A band like Front Beast might be more regressive than Darkthrone, who does regression on purpose. Not so sure about Front Beast…