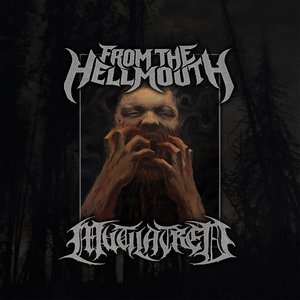 Sometimes there’s nothing better than hitting up a split release and discovering two worthy bands. While this is neither band’s first release, it’s the first time this scribe has encountered this Ohio duo: From the Hellmouth (Cleveland) and Mutilatred (Toledo). It’s a promising introduction to both bands.

Up first is From the Hellmouth, who come across with a rather direct, forward, and brutal death metal assault. Nothing but the purest death metal is what you’ll come across here – nothing outside of the box, but done with enough punchy riffs and savage melody that you’ll be instantly pulled into the band’s three available songs. Lots of tempo changes keep things fresh, and the full-out intensity is rather appreciated. Something that the band can really lean into for a smaller release such as this. It’s rounded out by some solid grooves on occasion and some vocals that are suitably monstrous (a good fit to the thick and oppressive riffing).

The other side of the split is rounded out by a slightly different death metal act, Mutilatred. Some of that fuzzy, distorted riffing that is reminiscent of Mortician is here, and fits the band’s blistering assault well. Lots of fast-paced riffing pulls the songs through, which tend to stick more towards the 2-3 minute mark. Some occasional slowdowns and slam-type chugs also do their best to change things up (happily in a nonpredictable format). The final track is an 8-minute noisy/ambient piece that feels a bit drawn-out in length but is a satisfying mood-setter.

Whether it serves as an introduction to one or both bands, or a short but sweet taste of things to come, there’s plenty to enjoy on both sides of this one. Check it out, and keep your eyes peeled for more material for each act.