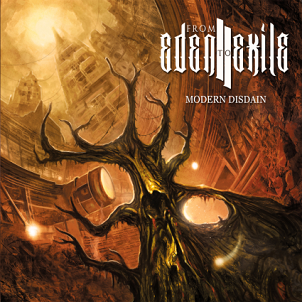 Avoiding the allure and/or songwriting fail-safe that is the beatdown has proven a difficult task for many a young band. You can pull up just about any XYZ band formed after 2012 and find the usual formula: Fast, frenzied opening, then beatdown time roughly 30-45 seconds later. It has become mind-numbingly predictable, so when a band like the U.K.’s From Eden to Exile manage to not employ such tactics, it’s reason for applause, celebration, grand parade.

Formed in 2012, the band were the 2015 winners of Bloodstock festival’s “Metal 2 the Masses” contest, a showcase that gives young bands an opportunity to play in front of crowds who filter into one of the U.K.’s biggest metal festivals. Fast-forward two years later, and the Brits have emerged with their Modern Disdain debut. Playing a brand of modern death metal that skips through groove, technical and partial deathcore happenings, From Eden to Exile, to their credit, have some diversity in their sound. The tech twists that pop up on “Gospel Untold” and “Victim” are usually offset by minor melodic guitar work, while “From Eden to Exile” (the song, that is) and “What You’ve Done” are kinetic, brutal offerings.

While vocalist Matt Dyne occasionally overwhelms the tunes with his rather constant barking, From Eden to Exile appear to be a band who won’t fall prey to modern trends in metal. (Perhaps that’s why their album is named Modern Disdain.) A well-rounded, relatively mature effort from a new(er) band, Modern Disdain positions From Eden to Exile as a band to watch the ever-competitive U.K. extreme metal scene.