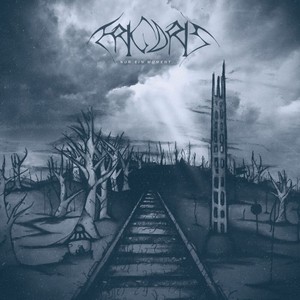 Seeing things move against the current grain is always satisfying. In our worldwide culture of instant gratification and song-driven (as opposed to album-driven) appeal, we can count on metal bands to buck the tide. Germany’s blackened doomsters Frigoris give us their third album, Nur ein Moment (Just a Moment), and its only part one of a two-album concept (how’s that for making one wait…) – one that deals with the consequences of suicide in an interesting way.

The concept itself is fertile ground for a band with a sound such as Frigoris. They go the extra distance by setting up the concept as a story, complete with a prologue and putting the songs into chapters. The album ends appropriately with an interlude (but don’t expect it to go out with a wimper). Black metal and doom make up the bulk of Frigoris’ approach, with some dabbling into post-metal here and there for added effect. All in all, it’s quite effective at pulling the listener into it’s tale, finding just the right blend of (somewhat) abrasive blackened melodies with feelings of melancholy and isolation. It’s a bleak approach from the get-go, with a familiar sense of longing that Kauan provided on their last effort. A bitter blend of sorrow with moments that feel almost triumphant (“Himeros”). They also use violin to enhance the mood at times, with “Et in Arcadia Ego” introducing them early on and designing a strong finish to the opening track, serving up just the right amount of emotional heft. Some additional highlights can be found later in the album with the beautiful sorrowful “Persona” and previously mentioned closer “Station,” which builds from strings upwards to powerful and depressive riffing.

Nur ein Moment manages to pull on the heartstrings without being melodramatic or using cheap ploys. A somber album that reels the listener into a cold and bleak landscape that yields some resonating feelings once the album is complete. And as the first of a two-album concept, rightly gets the listener excited to see how they conclude it.