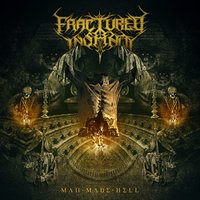 Returning for a third helping of Belgian brutality, Fractured Insanity has been without a release since 2010’s Mass Awakeless. Not that time is of the essence with an album like this. Fractured Insanity are good at what they do, but their approach to death metal is one that isn’t riddled by the sounds of the times or trends. It’s simply death metal, beginning to end.

Of course, simply death metal is never quite as simple as it seems. The band takes a more Suffocation approach to things. Meaning that the music itself is quite evidently brutal death metal, but there’s some quasi-technical riffing involved. Another good ‘name game’ band here would be Nile, with the emphasis on some occasional inter-woven melodies to keep the ears attentive. “The Blame of Humanity” has that relentless speed front covered, but there’s a nice subtle and technical guitar melodies that blend in at a few points in the song. It’s these melodies (see the title track as well) that keep everything from becoming just a freight train of destruction. The heavy use of blast beats brings the Italian death metal scene to mind, and the occasional slowdown that brings things into the “crushing” realm are worth noting.

The obvious factor that hasn’t been touched upon is that Man Made Hell never really branches into its own style. It’s easy to praise for its use of melody to keep things interesting, but these are tried and true elements that genre fans have heard many a-time before. The execution and presentation for the sound is near-flawless and worth a gander, but there’s simply no new ideas that are being brought to the table with Man Made Hell.