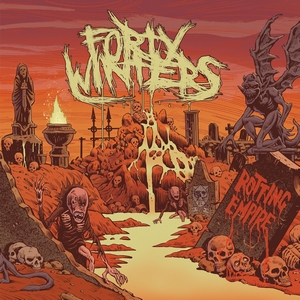 At one point in time, metalcore had more significance behind it’s name. There was more to it than just attempting to be the next Killswitch Engage or Shadows Fall. Metalcore had more aggression and abrasive qualities to it, instead of trying to balance the aggression with a chorus that could have more broad appeal. For those that still look in that direction, Forty Winters is going to be your new safe haven.

Rotting Empire gets straight to the point of what it is with the opener “Summoning Spirit.” You can hear some similarities to early Darkest Hour or Unearth (before either act started utilizing clean vocals), or even Himsa. It’s a full-out hardcore assault that finds equal footing with its more metallic thrash and galloping speed. The riffs hit hard – plenty of bite behind each of them, and the trend continues with each successive track. To see the band at their heaviest and most blistering, check out the short but sweet “Human Sacrifice,” which comes out at full speed before a rather punishing breakdown slows things momentarily. Breakdowns can pop up from time to time, but they feel more earned than being there “just because.” If there is one negative, it’s that the frantic nature of the album does kind of make tracks into more of a blur the longer that you listen to the album (something not uncommon in more extreme metal as a whole).

While the band may stick to the more aggressive end of the metalcore spectrum to a fault, it’s also nice to hear a band that is willing to do so. There’s no concern about being flavor of the month there – Forty Winters intends to bludgeon their listener without any compromise, which makes Rotting Empire a more solid effort than much of what the genre has to offer in 2016.