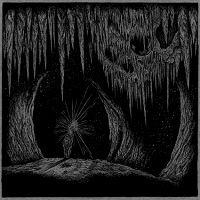 Never quite sure what you’re going to get from the folks at Gilead Media, who throughout the year (and in years’ previous), have done quite the good job at scrounging up some not-so-obvious extreme metal acts. In the case of Boston’s Fórn, it’s a decidedly black trip to the bottomless pit of despair (no hyperbole) over the four songs that make up their Weltschmerz, which in German, translates to “world weariness.” An apt description, for sure.

Funneled through despair-riddled doom, Fórn on occasion, treads into funeral doom territory, as evidenced by the lurching tempos found here. Opener “Saudade (Part I)” is the appropriate tone-setter, boasting a true downer of a main riff, and is something the style’s early handlers would have gobbled immediately. A barren lead melody threads on through, while bleak atmospheric breaks get a handle on things. The song is book-ended by “Saudade (Part II),” which is simply an atmospheric piece, but it sets up “Dolor (Part I)” rather nicely, a song that is even more capable of blocking out the sun, if you will.

Such undeniably oppressive doom like this is generally hard to come by. The sheer weight of the four cuts here are hopefully just a glimpse at what Fórn is capable of, who in all likelihood, can replicate such matters across a full-length.