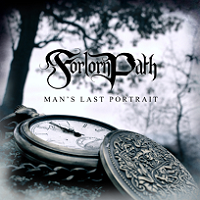 Save for a few, unsigned bands in their nascent phase haven’t got it all figured out. They’re almost like teenagers, thinking they know everything, but at least they’re not like Death’s “The Philosopher,” knowing so much about nothing at all. That in-between phase is where live shows and crappy demos come in handy, and is probably the path New Jersey melodic dark metal act Forlorn Path find themselves on for the release of their debut full-length, Man’s Last Portrait.

A common band practice is to place your best song at the front of the album, as so not to lose the listener’s interest. Obviously, Forlorn Path has done such a thing with “Empire of Decadence,” a blackened slab of morose dark metal. The lovely clean-channel guitar spot placed at the song’s ¾ mark is memorable, swiped right from the pages of My Dying Bride and Anathema when they were heavy. It’s an excellent launch point for the album; however, Forlorn Path need to cut some of the fat from their songs before they move up to the next level.

Minus the mid-album track “A Moment of Silence” (which is under three minutes), Forlorn Path pad their songs with far too many riffs for a band of their ilk. All the band needed to do was track down the golden Turn Loose the Swans and ponder how My Dying Bride made a handful of riffs mightily effective per song. ‘Tis not the case here, for the band’s compositions leave little in which to hang onto, outside of the caressing “As Hope Fades,” where upon gentle piano work complements dark melodies rather well. Had more of this been in supply, we’d be singing a different tune about Man’s Last Portrait.