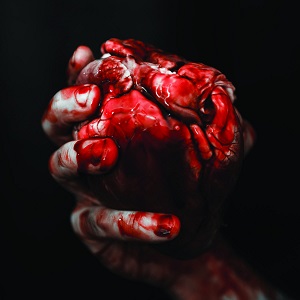 Always have a soft spot for these guys, probably because they were one of the first true “depressive” black metal bands, or, they simply write gut-churning songs. Forgotten Tomb has remained one of Italy’s better underground bands since 1999, highlighted by worthy albums like 2007’s Negative Megalomania and 2011’s Under Saturn Retrograde. Consistency, along with minor touches to their sound has lent quite a bit to their stability, even in the face of main dude Herr Morbid’s recent car accident that almost rendered him unable to play on We Owe You Nothing. But alas, the Italians trudge forward, nihilistic as ever.

Marked somewhat by an increased sludge influence in comparison to 2015’s Hurt Yourself and the Ones You Love, We Owe You Nothing still retains many of Forgotten Tomb’s hallmarks. Those dirty, almost ragged riffs played at 4/4 are at the core, especially when the opening title track makes its way through. Morbid’s big, searing riffs here are quite heavy, going for the sludge look, all the while not getting lost in the mud. His careful melodic intrusions — never an overbearance — are at the top of the ladder on “Abandon Everything,” the album’s up-tempo highlight.

In no certain terms is Forgotten Tomb a black metal band these days, but the attitude and certainly, outlook, remain from their early days. On We Owe You Nothing, Morbid and gang remain suitably grim across six songs with more than enough weight, so much so, that you feel like you’re sinking down to the bottom of life’s drain with these guys, slit wrists or not…