Forgotten Tomb – …And Don’t Deliver Us From Evil (Agonia Records) 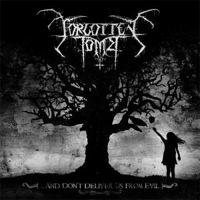 Go away for eight years and the world is apt to be a radically different beast upon return. It isn’t that Forgotten Tomb has been away from the world for eight years, but indeed it’s I that has been away from the world of Forgotten Tomb, my last time spent with the band being in late 2004. Songs To Leave and Springtime Depression and the full-on one-man depressive black aesthetics that dominated those releases failing to suit the needs of my nascent metal palette and the band never sticking with me for long beyond that. It’s here and now in 2012 that the band reemerges in my listening consciousness with the unfortunately titled …And Don’t Deliver Us From Evil and the effect is palpable.

There have been some enormous changes.

From the get-go the album carries with it a very Daylight Dies (or perhaps Ghost Brigade if you’re feeling frisky) melo-deth kind of sound with a focus on consistent song structures and driving melodic focus. Clean vocals are applied very rarely, instead the melody coming out through ever-present and ever-pretty guitar, often afloat over chunky rhythms and aural assaults, featured everywhere but most assuredly on album summation “Deprived”. Blackened bits from the band’s past do come to the fore occasionally, notably on the title track and are balanced with very calm and even trance-inducing moments as on the back half of “Cold Summer.” Variety however is not on in the offerings (though in this style it rarely is), it doesn’t emerge as a particular problem due to the set up of the songs – each configured in such away to just avoid bleeding together with the rest, even with their somewhat bloated (all 6-9 minutes) run times.

Somewhere in the past half-decade plus main man Herr Morbid saw a reason to pursue a change and the transformation for someone out of the loop has been staggering. Much more tangible and impactful than the depressive black of years past owing to the searing and constant melodic outpourings, the band is in spectacular shape and enjoys formidable company (the above mentioned bands especially). There is much to enjoy here beneath the melodies of decay and the espousing misery, rarely a more fitting score for the season at hand. A dramatic shift across the board, let’s hope I don’t wait another eight years to listen to the band again, I shudder to imagine what differences may emerge!