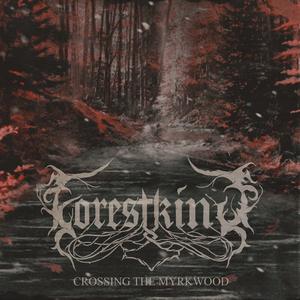 First introduced to Forest King with their excellent 2017 debut, Lore Born, the band has now returned with a follow-up in Crossing the Myrkwood. Initially grabbing appeal with a Viking sound that was rooted in folk but also doling out thrashy energy, it feels the like band has doubled down with this second effort. An interesting mix of genres that can easily appeal to Viking/folk metal fans as well as those seeking some thrashing extreme music.

Forest King’s blend of styles is really the piece that sells their sound (and therefore, Crossing the Myrkwood). You can hear those epic elements, and some woodsy ones here and there, starting with the opener “Dead Moon of the Dark Wood,” as it opens with some eerie synths before diving headfirst into some rather vengeful thrashing and high-tempo riffing. Some darker, ominous tones rumble along with the often playful riffing (see “Waking of the Dead” or the title track) and help augment the attack, yet other tracks have a more epic and elegant feel at times, like the opening to “Sleep Thorn,” which then uses some triumphant melodies to bring the music in a different direction. The closing track, “The Nothing,” is a nice way to finish things up, with a longer build up and execution to the track. The swirling riffs and keys towards the track’s ending really elevate it into something special that will stay with you as it finishes up. The contrasts between that more frantic and buzzing energy with catchy melodies gives the band an edge in that they can bring in some heaviness without it feeling awkward, and keep it melodic enough for folks who enjoy that to feel right at home.

An enjoyable second effort that sees Forest King strengthening their sound, Crossing the Myrkwood wields both Viking epic glory and a more immediate frenetic rush at times. It’s all handled with finesse, giving Forest King a more unique space to occupy in a genre that often has a very similar feel to it.