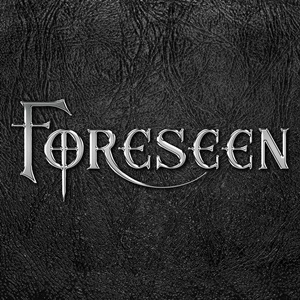 Taking in this Pensacola, Florida power/progressive metal band back in 1997 at the inaugural Powermad Festival in Maryland, Foreseen have spent the last three years sharpening the recording and songwriting for this third self-titled record- as well as supporting Queensrÿche and White Wizzard among others locally. Gaining a fair amount of overseas accolades, the four-piece embrace a forward thinking montage of American progressive metal with European power finesse – where solid musicianship and engaging harmonies/ melodies matter over any commercial aspirations.

It shouldn’t be that surprising that a bevy of Florida notable artists factor into the guitar outlook and drumming propulsion of Foreseen. “Crossing the Line” for instance contains a lot of the sinister licks / runs that elevated Savatage during the 1980’s, while the punch snare/kick action for “Mr. Hyde” brings back a lot of classic Crimson Glory memories. Subtle staccato riffing creeps in against a hypnotic twin harmony to start “We Still Have Tomorrow”, the foundation shifting into this Queensrÿche-like arrangement as the clean verses offer a more spacious, alluring context. When the band chooses to be a little more straightforward in “Only the Wicked” or “Thorns”, you can hear more dark power overtones, even as the vocals soar into Geoff Tate meets Russell Allen terrain. Acoustic guitars and distant vocal mechanics make “The Raven” a dynamic ballad highlight, one the younger generation of musicians could use as a springboard or proof that you need not always be fast or heavy to be metal.

Gavin Meagher sets Foreseen apart from most of the power/progressive metal singers treading the scene – his understanding of when to settle in mid-range comfort zones or use more of an AOR-ish phrasing makes the times that he ascends to eagle highs on “Shadows Fall” that much stronger and meaningful. An hour playback could be tedious to some attention deficit listeners, but Foreseen properly mix things up in terms of anthems and more adventurous cuts to eliminate ear fatigue. 15 years since their last studio effort, Foreseen makes up for lost time and hopefully gives the quartet a bright new opportunity to capture more followers of power/progressive metal.