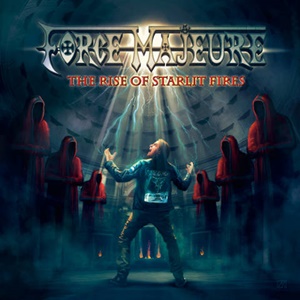 Although active since 2001, chances are you’ve probably not heard much of this Finnish power metal quintet’s discography. Previously releasing a series of demos and two albums in 2008’s Frozen Chambers plus 2011’s Saints of Sulphur on Finnish labels like Low Frequency and Scandal Music Company, the newest album The Rise of Starlit Fires features not only a stronger label presence with Mighty Music, but recruiting another vocalist in Marcus Lång – also in Excalion these days. After a few whirls, these eight songs contain many requisite uplifting melodies, speedy riff combinations, and potent double bass-driven tempos that recall the classic mid 1990’s to early 2000’s power period that captured a worldwide buzz about the movement.

The orchestral/keyboard elements that drummer Jaakko Nylund provides set things up in a Teutonic-like dream state, allowing guitarists Eemeli Ojanen and Jussi Reuhkala to team up together for solid riff work, most evident on “Blessed by the Wolves” or the thunderous follow-up “The Great Starfall”, the latter rhythmic in its transitions and jackhammer bass/guitar interplay. The primitive tones bring about a classic, traditional feel at times – giving opener “Gemini Rising” a bit more of an Iron Savior flavor as the guitar melodies shine as equally as the diverse mid-register to higher action of Marcus on the vocal front. Unafraid to push barriers, the blast beat/extreme instrumental action during “The Darkening” was a bit of a welcome surprise, diversifying an already eclectic 6:21 song that moves from traditional to progressive nuances. The bass heroics and exemplary play from Tuomas Väänänen elevates the musicianship a couple more notches – and there’s nothing wrong with adding a little Geddy Lee/Steve Harris-orientation to the proceedings.

The best power metal needs the charismatic force and confidence that a quality singer provides. In Force Majeure, Marcus steps up to the plate in all facets. His rich, vibrant character and proper essence of when to use restraint and when to belt it out are evident throughout The Rise of Starlit Fires – conveying Ronnie James Dio as easily as Marco Hietala on the faster “Apocalyptic Hearts” or the slower, traditional/Sabbath-esque “Church of Steam”. From front to back, Force Majeure concentrate on engaging hooks, melodies, and tempos – never stagnating in their traditional, melodic power template. If you’ve grown weary of the genre, or just desire someone to put their focus back on the music and less about bombast, this album could check off all the boxes for your tastes.