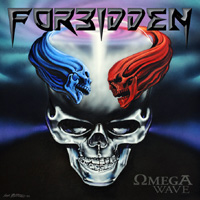 They’re all coming back, aren’t they? Guess it was only a matter of time before Forbidden jumped into the act, which is fine – they were one of the few Bay Area thrash bands with the gall to use melody, thus making their 1989 Twisted Into Form album an unheralded gem. Last heard on 1996’s very modern (read: Machine Head/Pantera) Green, the band has made the sound move to return to their technical thrash roots with Omega Wave.

In what is probably a concerted effort to keep up with Exodus and Testament (both of whom are arguably heavier than ever), Omega Wave rarely lets up on the crunchy thrash action, specifically on the quite enjoyable “Overthrow,” which in an ideal situation, would garner a massive pit thanks to a bruising riff. Guitarist/primary songwriter Craig Lociero brought in a truck full of throttling riffs – just check out various portions of “Forsaken At the Gates,” and the groove-oriented “Swine.”

Back in the day, singer Russ Anderson had probably the finest thrash pipes out of ‘em all, usually eager to let his massive range take hold. Not quite the same here (we’ll blame Father Time); although the man’s soulful, well-enunciated vocals remain probably the best thing about Forbidden. His work on the quasi-epic “Dragging My Casket,” and up-tempo and melodic “Hopenosis” easily lay waste to what his contemporaries are doing, outside of Death Angel’s equally-as-competent Mark Osegueda.

Omega Wave will more than likely keep Forbidden a few paces behind the rest of the retro Bay Area major players, yet it’s a drastic improvement from Green, which 14 years ago, sounded forced and contrived. For bands like Forbidden, the only real option that exists is to head back to their roots, play it relatively safe, and keep this thrash thing alive. Omega Wave may not touch the glory that is Twisted Into Form, but it’s proof the band has plenty of life left in them.