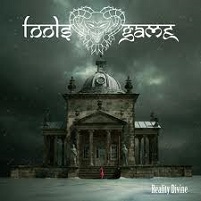 By no means a sure-thing, Reality Divine looked good from the start. Boasting members of Pharaoh, Manticora, and Ark, the brainchild of guitarist Matt Crooks holds the grand flag of melodic metal high, with a sometimes bloated, but mostly enjoyable nine-song offering. This is the type of stuff that makes melodic metal look all the more appealing, even as we’re regularly inundated with porous power metal.

We can draw a straight-line to numerous acts under the melo-metal lineage, but Fool’s Game

do quite the respectable job of toeing their own line, something we’ve become accustomed to with most Cruz del Sur acts. Opener “Mass Pyschosis” is a mid-paced rumbler, highlighted by a litany of twin guitar melodies. “Sowing Dead Seeds” is augmented by Euro-friendly keyboards and some well-placed lead guitar action from Crooks and Pharaoh axeman Matt Johnsen.

“The Conqueror Worm” is the type of mini, yet sprawling epic number that fails to tire and is graced with the always-killer vocals of Tim Aymar (Pharaoh, ex-Control Denied). Growled vocals are peppered throughout, but are hardly a focus as Lars Larsen (of Manticora) does an admirable job of not overstepping his bounds on “Prelude to the Fair” and “The Wild Swans At Coole.”

With the dearth of quality melodic metal acts left in North America (we can probably count on one hand), it’s highly encouraging to see someone like Fool’s Game come across our path. It should satiate the power metal crowd and should plunge mightily into the trad metal crowd, who are never satisfied, but should be with this.