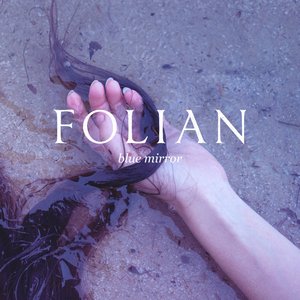 David Fylstra, the prolific genius behind Folian and countless other collaborations, is releasing his first LP after a steady stream of live splits and EPs. Blue Mirror comes out on the 31st of January and it sure sounds and feels like a winter record.

It also won’t be out of place in forlorn towns like Silent Hill, what with its morose tunes and wistful atmosphere. It’s an album best listened to while you are walking in a graveyard at night, or an abandoned building while snow steadily builds up on the roads.

“This is the place,” gently ushers the record in with a warped drone, followed by “Go Alone,” with its melancholic strings undercut by distorted guitar and emotive screams. A warped interlude named “Away” comes in to welcome “I Am You,” a song that sounds like you’re walking in a blizzard, howling winds notwithstanding. “Further-Give” is another piece that serves to heighten the drama unfolding before you before “Unwanted” makes it presence known with its Wear Your Wounds aesthetic, complete with the almighty E-bow to drive the dragger deeper into your heart. “No Wake” comes in between, and it reminds me of Lustmord and Sparklehorse if they had a lovechild. The penultimate track “Erasure” which clocks in at ten minutes, is a slow burning descent into the depths of icy waters that serve as your grave. It also sounds like a slowed-down track by Russian Circles called “Sinaia” from their most recent offering Blood Year. The album closes with “Tomorrow” a whimper of a track, fittingly ending the palpable emotional despair.

Without a doubt, this album will be one of the best records gracing us this year and it should serve as a soundtrack for everyone trudging through the ennui of everyday life.