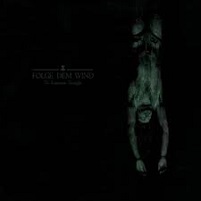 It’s no longer surprising that France is a real hotbed of some of the best black metal to come out of Europe, and it follows that my interests were piqued when I saw where this band, Folge Dem Wind, comes from (near Paris).  Described as a pagan black metal band, I must say that maybe my own understanding of what I think “pagan black metal” sounds like was a little betrayed by what I heard.  Normally, I drift right toward the folkier, earthier, more battle-lusting themes and sounds.  Bands like Moonsorrow and Nokturnal Mortum might pop into my mind.  Shows how much I know.

Now on their third full-length album since their 2005 demo Hail the Pagan Age came out, Folge Dem Wind give us To Summon Twilight, nearly 45 minutes of some really great guitar driven black metal.  To me, I think of a more riff-heavy take on French band Peste Noire (less of the avant-garde side,) with some elements of hardcore punk rawness, smart and vaguely indie rock guitar sensibilities (a particular riff in the middle of the title track is just fantastic, as well as their smart guitar interplay throughout the record), excellent wildman drumming, a terrific vocal performance (sometimes I swear I hear Gollum invoked) and lots of aggression to it all.  Cool riffs with interesting melodies and solid bass work paired with great rhythms and exciting vocals make this album a winner.

While Folge Dem Wind isn’t groundbreaking, they by no means spin the same threadbare tire around either.  This band definitely have a sound that is theirs, and it doesn’t sound to me to be easily compared to many other bands, at least none that come to mind (aside from their aforementioned countrymen, and then only to a small degree).  There is a vitality to the music that’s undeniable – an untamed, energetic and frantic urgency that merits attention from black metal fans who like to venture a bit outside the black and white traditions of the orthodox traditional.