Foaming at the Mouth – Writhing (Self-Released) 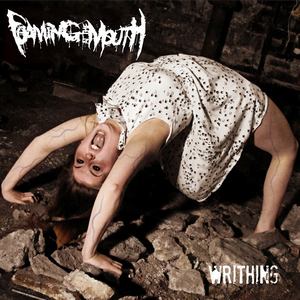 There’s much to be said about one-man extreme acts within the scene currently, but two-man acts? It’s a bit more unusual, strangely enough. Foaming at the Mouth brings together drummer/vocalist Kyle Eddy (Internal Bleeding/Mucopus) and guitarist/vocalist Jeff Leifer (Crator/Tentacles) in a straight-forward death metal assault that’s been a few years in the making at this point (2013 to be exact). Writhing feels like the real thing, with a no-frills approach worthy of an investigation.

Be it that the band is composed of two members, there’s still a lot going on. The drumming is intriguing, not settling on simply blasting away at all time but instead providing a real variety of material that helps to enhance each track. The guitars do the same, knowing when to lay into some thick grooves (lovely of the upstate NY specialty) or do something a bit more technical in approach. This leads itself into a pretty blistering attack, which the 30-minute runtime serves well. But its not without some melodies either, with songs like “The Siren” indulging into some melodic territory without losing the bludgeoning edge of the band. The dual vocal performance also helps to keep things moving ahead, as both Leifer and Eddy give their own take to the extremity. But in the end, it’s really the power of the riffs, and the constant barrage of ‘get the pit moving’ grooves is more than enough to sink anyone’s teeth into.

Deathly from beginning to end, Foaming at the Mouth provides plenty of energy and passion on Writhing. While it’s grounded in genre, it knows exactly what it wants to do. So unwind after a stressful day with Writhing, and let Foaming at the Mouth show you that there’s still lots of fun to be had in the death metal underground.