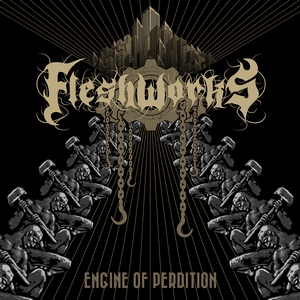 Sometimes it takes but a few mere seconds to understand the goals of bands within the metal scene. That’s not an insult by any regard, as bands that favor this approach often can produce a singular vision of their sound. Some may put the blinders on when it comes to other aspects, but in speaking to that of death metal, brutality is always going to be king. A band that can’t deliver on that simple premise isn’t going to last.

Engine of Perdition is Fleshworks’ second effort, though it’s been 9 years since The Deadventure (love the name) was unleashed. Despite the time lapse, it seems written into the band’s DNA that they are going to be an attack first, questions later type of presence. The type of thing that never goes away over time. Yet despite its familiarity, the immediacy of the riffs (not to mention their cut-to-the-bone production) are bound to win over the fanbase seeking the next adrenaline rush. An often blistering tempo is the norm (see “The Moloch”), complete with chaotic blasts and spiraling riffs that while they aren’t hyper-technical, get the job done and keep the listener engaged. The vocals are dark and sinister in their tone, a brutal match for the visceral music that surrounds them – again, even in pretty well-played territory.